Regardless of whether or not there is a demand for you, this year's major TV brands have started to promote 4K TVs. The latest TV products that have been frequently sent for a while include a large number of Ultra HD models. At this stage, some users are buying 4K TVs with one mind in place, and the current 4K TV's increasingly closeness to the people also allows users to accept it more.

Haier MOOKA is a very popular â€œinternetizedâ€ 4K product in the near future. This Internetization is reflected in its resource supply lineup, product sales model, and close to the peopleâ€™s pricing strategy. Today we introduced to everyone is this popular 4K TV, which has 42, 50, 55 three-dimensional version, we received the test sample for the 42-inch models, priced at 2999 yuan. It adopts the limited-edition mode commonly used by Internet TV. The purchase needs to be reserved. Successful booking means the number of places purchased.

The shape of the Haier MOOKA TV is not unassuming, but the asymmetric structure of the all-metal base is also revealing the industrial design style of Internet TV close to young people. Although this is currently the most economical 42-inch 4K TV we can buy, MOOKA does not use a black plastic wrap-around square base like the low-end products. The narrow frame and slim design of the TV can meet your living room requirements. Face needs." 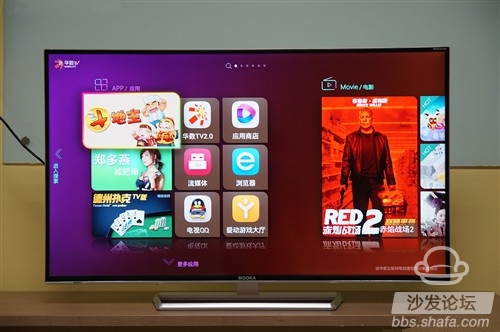 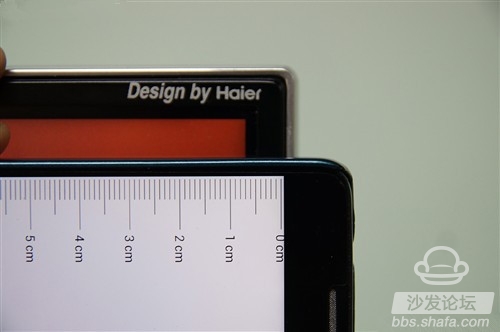 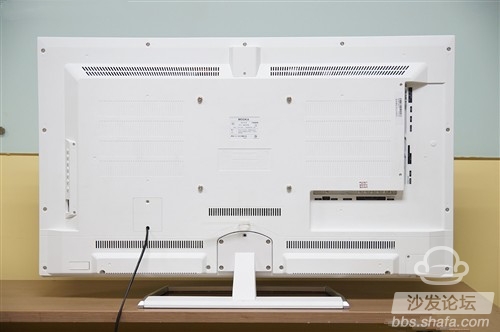 MOOKA's silver frame has a strong metallic taste, while the back is treated with a white spray paint process, which does not save production costs in â€œinvisibleâ€ places. The side of the TV is an all-in-one design, but the difference in color between the silver side and the back white shell will give people the feeling of a splice shell. In fact, the industrial design of Haier MOOKA is more delicate than the mainstream low-end TV. 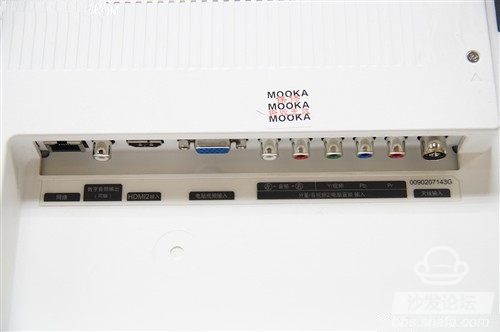 The interface area of â€‹â€‹the TV is in an L-shaped distribution. Audio and video inputs and outputs that are not frequently plugged in and out are horizontally distributed. USB-based extension interfaces that are more flexible are distributed on the side of the camera. If you do not rely on the edge of the TV cabinet, do not move MOOKA to connect it to mobile hard disk and other peripherals. 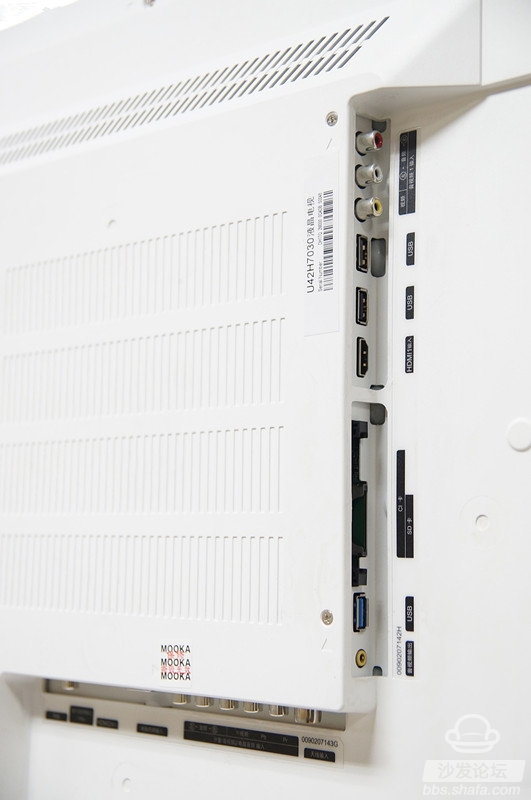 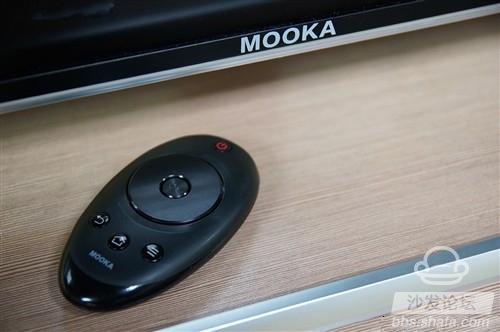 MOOKA TV's simple shuttle remote control cannot be simply described as good or bad. Its function is not much, and a five-button structure is very simple. The sleek, compact, comfortable grip can only give you the power to turn on/off and function menus. Digital buttons, somatosensory, or voice functions are complemented by multi-screen interactive clients. 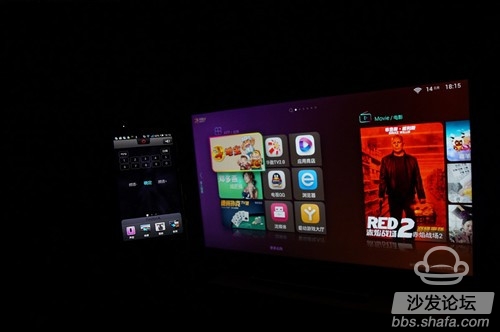 Haier multi-screen interactive client called Haier N + intelligent control, in addition to the remote control function also supports the digital key change channel, channel addition and subtraction, voice search, touchpad operation and other interactive methods. The above functions can be realized by using a smart phone. It can be said that it is a zero-cost multi-function remote control program, which can help us reduce the number of remote controllers, and the interactive experience is also better than the conventional remote control.

Haier MOOKA uses Android 4.2 operating system, minimalist Easy PRO UI simple and generous. MOOKA sets TV dramas, movies, and other resource classifications. It can complete on-demand operations without entering corresponding software, and the integration of video resources and UI is very high. MOOKA provides HD, SD and other resources to cater for different network speeds and resolution requirements. In addition, it supports full screen and original ratio adjustment, and the resources are rich. According to Haierâ€™s official website, this TV is configured with a 4-core CPU and a 4-core GPU, but it can sometimes feel a bit of burly, and I wonder if it is the reason for software optimization. 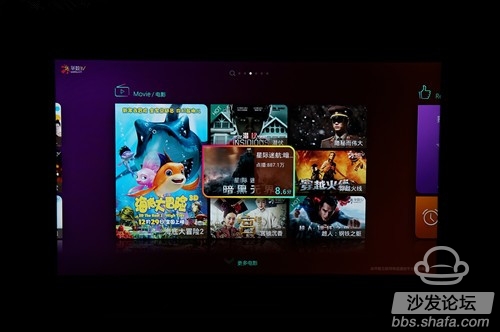 Video on demand integrated in the main interface of the system 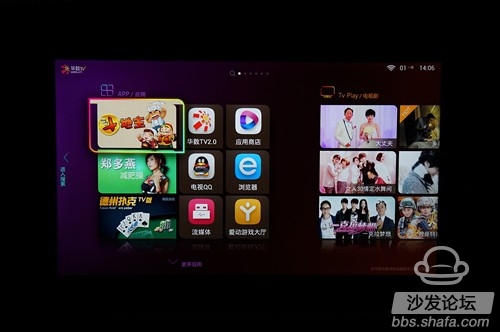 Software is in the first window of the main menu 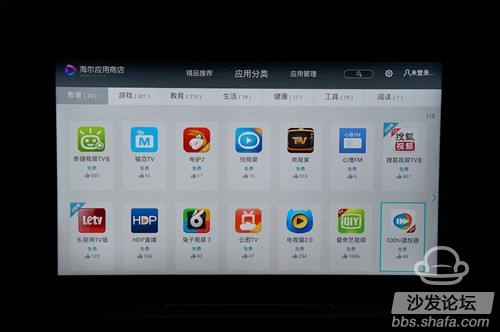 If it is not satisfied with the video resources of a single platform, the role of MOOKA application mall will be highlighted. MOOKA Mall is the most "Internet spirit" software market I have ever seen. The video application includes many of the most popular video on demand platforms such as Taijie, TV, Sohu, LeTV, iQiyi, and TV Cat. Whether it is a free live TV or the latest movie can be obtained from these software, with MOOKA can withdraw the blood cable from home. 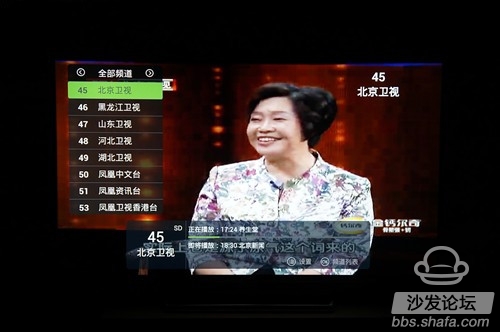 Use MOOKA to watch live TV 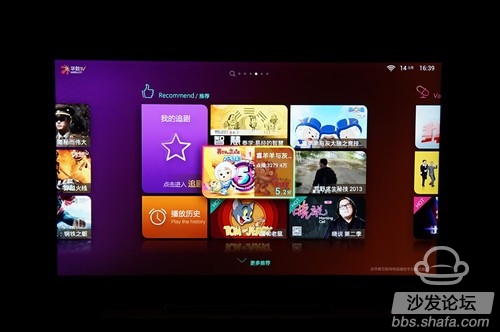 Out of the menu collection interface 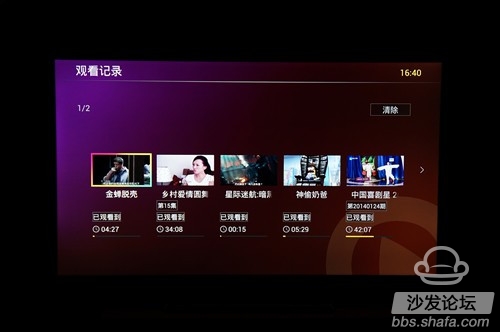 The elderly in the family may not be familiar with the operation of Internet TV. Haier MOOKA has also made careful considerations for these consumer appeals. The TV episodes and the history of broadcasting are all displayed on the homepage. The TV series the elderly are watching can be collected in this area. It is not difficult to operate with a compact and simple controller. The whole process is to press several directions and determine it. The graphical guide interface also displays the contents collected for the elderly more intuitively. 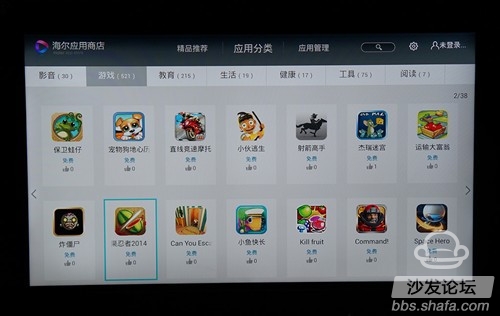 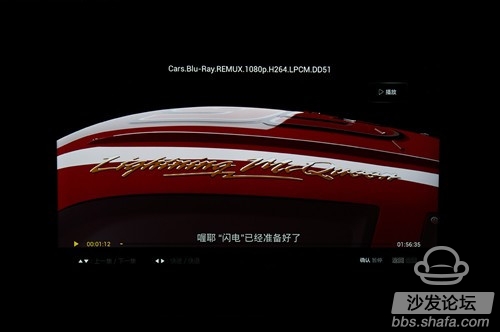 Play Blu-Ray REMUX movie in U disk no problem

MOOKA not only provides on-demand services for massive on-line video, but also provides casual games, TV QQ, and USB mobile hard disk movie playback capabilities for young people with more TV application scenarios. When friends meet for the 3rd or 5th, they can exchange emotions through entertainment, and everyday After the heavy work is over, the two can easily watch the video resources of the entire network or the latest movies and videos that have been downloaded at home. The MOOKA TV will never be able to retain its features.

The MOOKA video decoding capability has been tested to cover the current mainstream encoding formats except for 4K. Unfortunately, it does not support 4K video decoding. When 4K is popular, it can watch ultra-high-definition videos through on-demand network. 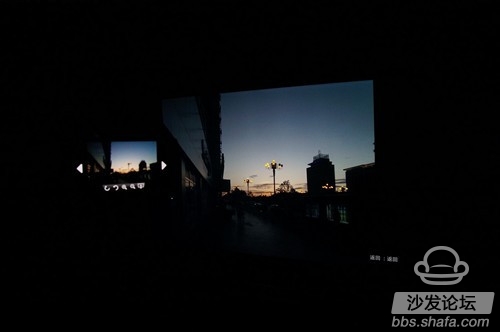 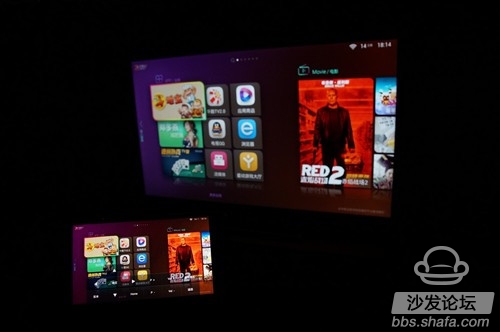 Transfer the TV screen to your phone

Multi-screen interaction is a function that accompanies the birth of Internet TV. When the mobile phone and TV are connected to the same WiFi environment, we can use Haier N+ intelligent control to send the movie and resources in the mobile phone to the TV for sharing. In addition, the television program can also be viewed. Reverse transmission to the mobile phone, you need to carry a mobile phone for a short time and you can always control the TV live. These are very useful small features and they are easy to use.

Have the pros and cons of Haier MOOKA quality analysis Haier MOOKA 42-inch 38402160 ultra-high-definition LCD panel, for 4K, the closer the distance from the TV or the larger the screen the clarity of the advantages become more obvious. According to the experience, in the case of distances of 1.5 meters and more, the resolution advantage of 4K is highlighted. If the distance is too far from the television, the two resolutions will not be too obvious on the small 4K TV. 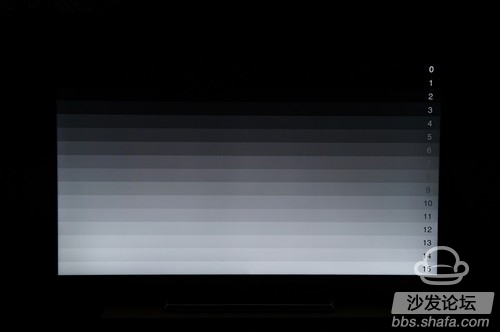 In the gray-scale test, MOOKA's 16-level grayscale reduction test can not show the difference between 0 and 1 grayscale. In theory, it can display a richer degree of color than a full reduction of 16 grayscale TV products, but in practical applications, color-insensitive users are hardly aware of the difference, only when more than two televisions will find each TV contrast. The difference in color tends to be different. 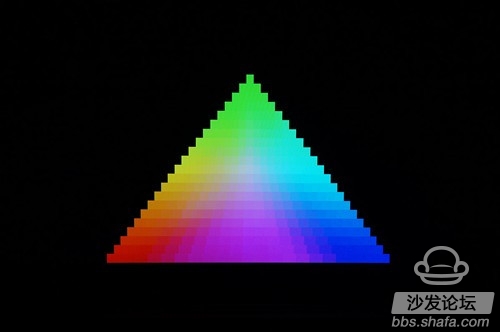 Color level tests showed that green is the weak link of MOOKA TV, and the boundary between the top three lines is not obvious. MOOKA has the best discrimination ability against blue, and the boundary of color can be clearly seen. 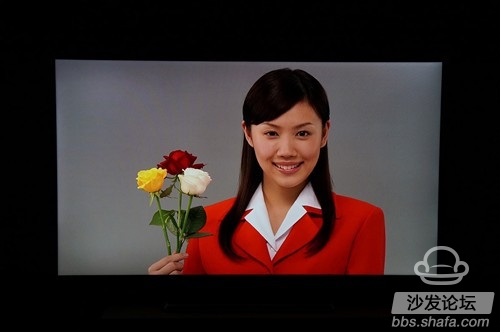 The color of the character's skin color tends to be somewhat reddish like MOOKA and mainstream TV, which is more suitable for Asian aesthetics, but some people prefer the true skin tone reduction. 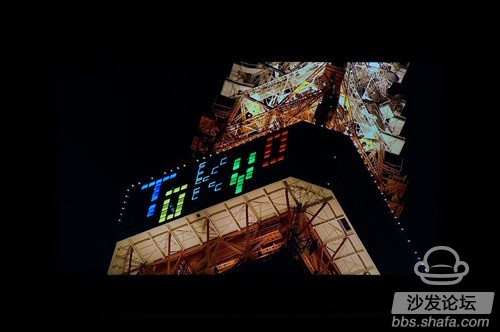 In the performance of the dark field, Haier MOOKA can present more details of the shadows. The details of the tower's center area grille are abundant, but this is achieved on the premise that the brightness of the area is increased. Therefore, noises and other noises of the original film source will also occur. It is more conspicuous because of the brightening of the picture. This part depends on personal preferences. 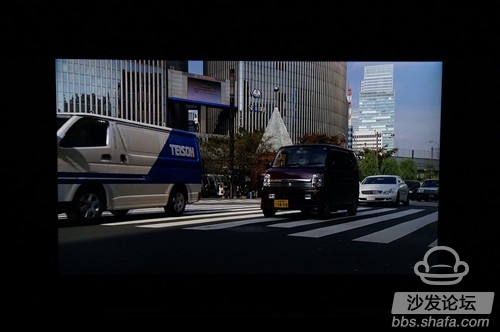 Can clearly see the license plate

The refresh rate of 120Hz provides a more powerful panel performance for Haier MOOKA, and it turns out that his dynamic performance is also relatively good. At least it has a certain advantage in the price segment, and it will be more comfortable watching live sports or playing games. 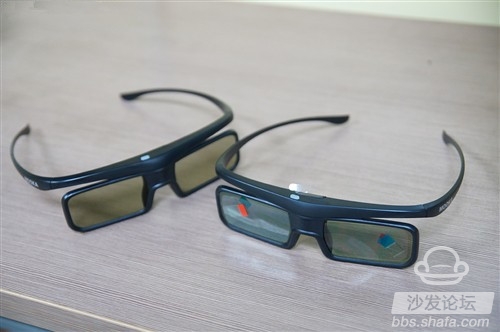 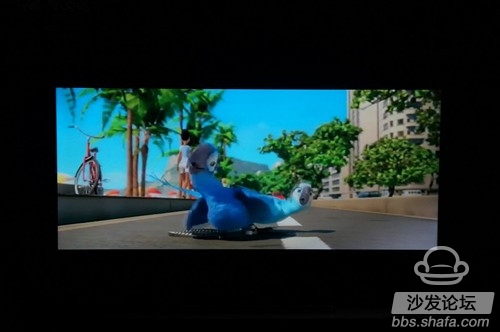 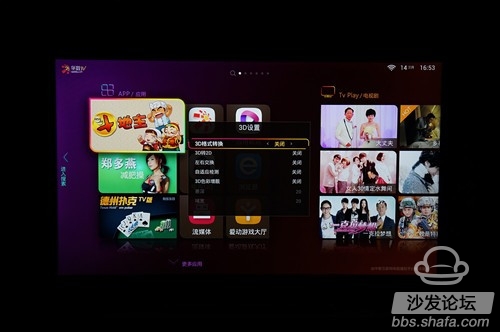 Haier MOOKA adopts active-shutter 3D imaging, which provides some 3D film sources within the WCDMA APP. For different 3D modes of viewing to be different, MOOKA provides functions such as 3D color enhancement and depth of field adjustment. Shutter-type 3D has a certain optimization effect, because the brightness can not be reduced because of the phenomenon of insufficient transparency, the actual experience of its brightness can fully deal with shutter-style 3D viewing.

At present, Haier MOOKA is the most cost-effective 4K TV we can buy. Its simple and easy-to-use system and remote control can make traditional TV users easily transition to the Internet era. In addition, it can also set up a program collection for the elderly at home, so that they can be individually Complete the video-on-demand feature.

MOOKA's powerful software extension capability is also one of its advantages. Without cracking, you can bid farewell to watching TV on cable. Nowadays, people's demand for picture quality is not too high. The lack of definition of common SDTV signals is far more noticeable than the lack of details in color. Therefore, I think that Haier MOOKA's performance is completely inconceivable. If you want to get in one step and want to be economical, it is definitely a TV tailored for you.

This content is copyrighted exclusively by SofaNet. Welcome manufacturers to further exchanges and cooperation with us to create more in-depth product reports.

Sofa Net is an Internet technology company specializing in smart TVs and boxes. It owns popular products such as sofa butlers, sofa tables, and sofa forums. It has been committed to providing high quality application resources for smart TV and TV box users and active community exchanges. And authoritative evaluation of smart TV products.

This battery is for replacing Lead-Acid Battery, it has the standard appearance and size as well as capacity, but longer cycle life and high energy and good charge and discharge performance.

Voltage:12.8V, cycle life is more than 2000 times, also can customize the capacity.